A remade video game crossover RP, based around the concepts of Kingdom Hearts

You are not connected. Please login or register

In the Crystal Fissure, far from the main town of Radiant Garden, light started to gather. The bright lights that came together started to take shape and the shape that it took was that of a person. As the light faded a woman with long golden blond hair, wearing white and gold armor with a pair of large wings sprouting from her back took it's place. The woman groaned as she slowly stood up and took in her surroundings.

"Where am I?" Rikka asked before her hand suddenly went to her throat as she could hear the changes to her voice. Now it sounded like a chorus of different voices which now made it sound rather melodic. Rikka looked around, taking in the small cave that she was in and then what she was wearing. She managed to keep herself together rather well until she finally noticed her wings.

"What happened to me?" Rikka spoke out even though there was no one there to answer. The last thing she could remember was the light pouring from the TV in the dorm she shared with her sister Yuki. She could feel the light empowering her so it had to be the cause of her new voice and form. But it didn't explain where she was or why something that should have been completely impossible happened to her. The angelic woman took a deep breath as she stepped out of the cave. It didn't take long for her to find both the town and the castle as well as the destroyed fortress. Rikka nodded to herself as she started to make her way toward town.

While she didn't know exactly where she was, she was hoping to find some answers to what happened to her. If not then it could give her a way to start finding those answers on her own.
Gregzilla 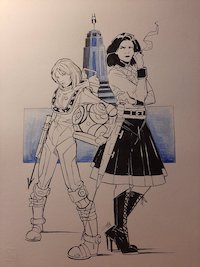 Along the Ravine Trail, there was a sound of conflict, of metal against metal, along with the soft crack of what appeared to be muffled gunshots, perhaps with an overall odd sound to them.

As the angel was walking, she would likely see the shape of certain shadow-based figures, dark and moving swiftly from one area to another. As one that seemed to be gray-armored knight came into view, having apparently charged, a blast of shadow hit it in the back, causing it to be sent careening over the cliff and disappear into tufts of smoke, its pink heart rising into the sky and disappearing. If she followed the path it took upward, she would see that there were three others that were still disappearing. Apparently this fight had been going on for a bit of time.

There was a grunt from a feminine voice, followed by a the figure they are attacking coming into view, having tackled one of her assailants to the ground, knees on its chest. She wore some kind of fantastical armor in dark gray and navy, though if the newly formed angel looked closely, she was not in purely fantasy-based clothes, but rather something retrofitted from a suit more based in science fiction. Aside from her voice, the only way to really see she was a woman was the form of the armor itself, which fitted closely to her body, as there was a hood over her head. On top of a humanoid, shadowy creature, she punched it once, twice in the face, and with a third, she brought down a strike in the forehead with a fist covered in shadows tinged with red energy. It began to to sink into the ground, and she growled in annoyance, a hearing the whine of a charging weapon and rolling to the side as the blast hit the shadowy creature's still three-dimensional form and caused it to dissipate into smoke, the side of her right arm singed with an incoming blast.

"Enough of this," she muttered, barely audible over another charge, and raised what appeared to be a dark handgun, something out of magic and science both, without standing up. With several pulls of the trigger, it fired off several rounds, then finished off with a blast of of pure darkness tinged in that same red energy, before she rolled to the side and back to her feet, the creature she had been shooting at, a robot of some sort, coming into view as it collapsed, another heart rising from it.

The finger came off of the trigger as she saw the incoming woman about her own age, and she lowered it to her side, though the stranger kept another weapon, what appeared to be a sword composed of shadow, down at her side, as if ready to attack on a moment's notice. To some, it may have appeared to be a relaxed stance, but to her, it was one trained by her mentor and close friend.

Her entire face was not quite obscured, but at the distance Rikka had, it was also unlikely to be easily visible. What was clear was those eyes, two with faintly glowing red irises, along with the face shadowed within, visible but not quite easy to see without enhanced vision.

A moment's wait, and the combat's survivor took a deep breath, realizing the threat, at least for the moment, was over. Relaxing her grip, the shadow blade seemed to disappear, leaving nothing but a broken knife, which itself was sheathed.

When Rikka heard something further up the trail it only made her move faster, not truly realizing that it was a battle until she saw it with her own eyes. She watched as the stranger battled creatures that seemed vaguely familiar to Rikka, much like the location that she was in but she couldn't place where she knew it from just yet. The strange woman was obviously skilled in whatever kind of power she was using being able to defeat those foes all by herself. Everything Rikka had just seen should have made what has happened to her more likely to be a dream and yet Rikka could feel something from the creatures and the power that the woman was using, that made her feel that this was all real.

With the battle over and the woman calling out that it was clear, Rikka took the opportunity to step out. She had her hands out to show she wasn't armed just in case since she knew nothing about the stranger so it was best to be cautious. The woman knew how to fight with powers that Rikka didn't understand so it was best to start on her good side.

"Thank you for defeating those creatures. I'm not sure how I would have taken care of them myself so I appreciate your aid. My name is Rikka Masami. Can you tell me where I am? I found myself in a small cave down the trail and I don't know how I got there." Rikka said, moving a little closer but not enough to make her companion jumpy. She also was sure not to reveal that her wings were not originally there just yet.
Gregzilla

Though tense, the woman took a deep breath. She knew better than to trust someone immediately, but this person about her own age appeared to truly not know anything about where she was. Her voice was intriguing, as if several of her speaking on concert, almost melodious. Her features were rather attractive as the hooded woman saw them, looking her up and down on instinct. Perhaps even a form of divine beauty, if there were such a thing. Coupled with the white and gold armor, she was tempted to call the person an angel, perhaps one who had fallen from the sky, hence why she had arrived at this locale without any knowledge.

However, despite any immediate reactions, the darker armored individual did not remove her hood just yet. If she were to do so, she would need to be in a safer location, or at least one where she could be certain she would not be noticed looking someone over. Still, having someone else to talk to would help, especially one who seemed to actually be aligned with light in some degree, as opposed to her year or even more in the dark. As such, she saw it safe to perhaps allow her name to be known, given she had learned to trust the light even as she used the dark.

"Azumi Tamashī. This is the crystal fissure outside of town, but wherever you fell from, this is Radiant Garden." Letting that sit, she continued onward. "If you're unable to defend yourself, probably best to get back to town, down that way," the hooded individual said, pointing in the direction down the Ravine Trail.
Sponsored content